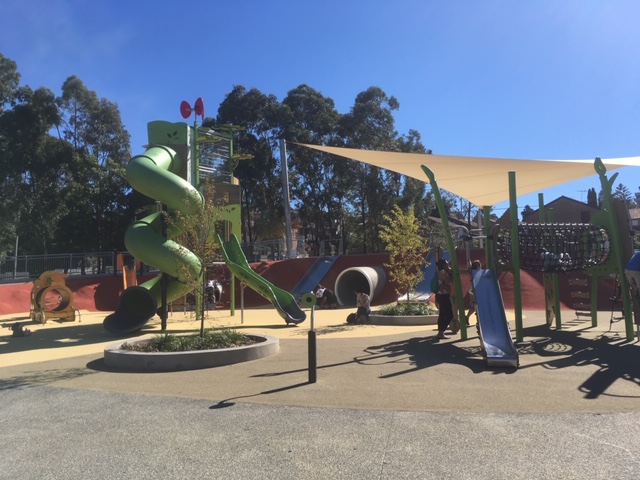 The City of Parramatta now has its first inclusive playground, Ollie Webb Reserve, on Glebe Street, Parramatta, an $1.8 million regional-sized playground which opened in February 2019.
This exciting fully fenced play space has a wide range of equipment to appeal to children from 0–12 years and of all abilities. Standard and all-abilities play elements are collocated throughout the playground. During the design process, the council consulted with numerous community members, including those with lived experience of disability, and external groups, such as the highly regarded Touched by Olivia Foundation, known for its series of Livvi’s Place playgrounds.
We checked out Ollie Webb Reserve during the April school holidays. My children, five and six years old, squealed with excitement when they first spotted the playground. The bright multicoloured palings alongside the entrance give an inviting feel. 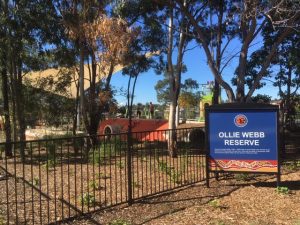 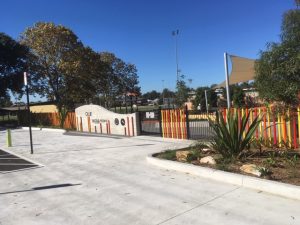 At the time we visited – midmorning on a Friday during the school holidays – the play area was busy but not overrun. On weekdays during term time, we would expect it to be quieter.
When you enter, you cannot miss the vibrant and expansive water play area, with various jets and showers and interactive elements. The water play area is covered with a shadecloth. 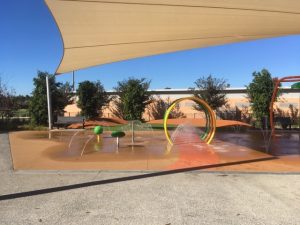 A large green tower with climbing nets, slides and a sliding pole was the hub of much of the activity among kids aged five and up on the day we visited. I did notice the climb and enclosed ‘dark’ tunnel slide challenged several kids. 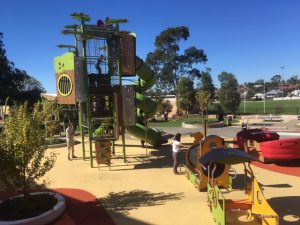 Another popular feature for young and older children is a large red mound with various in-built climbing elements, slides and tunnels. 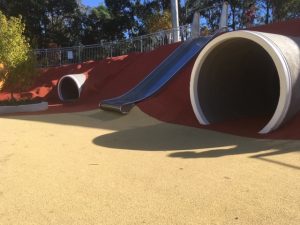 On the other side of the mound is a large sandpit and second water play area with pumps, troughs, water locks and channels. This area is protected by a shadecloth. 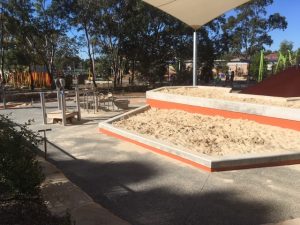 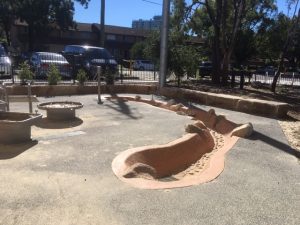 There is also a smaller green play tower with a slide, climbing net and pole; an appealing yellow and green train and carriage; a Sway Fun rocker; two in-ground trampolines and a variety of swing styles for different ages and abilities. 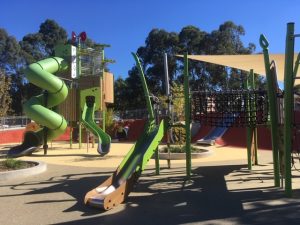 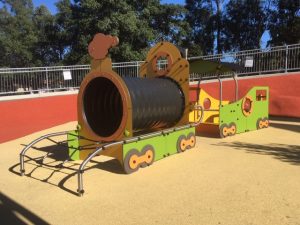 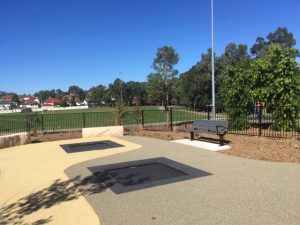 Some of the accessible features of the playground include the elevated sandpit and water trough, a carousel, the Sway Fun rocker, musical chimes, the wide metal slides on the mound (which can be accessed via a ramp) and a supported swing (with a harness). 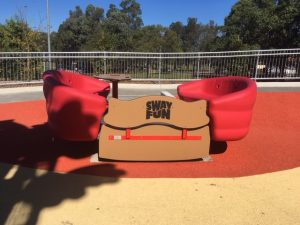 On the far side of the playground is a small play structure with two slides, climbing and balancing elements, a play truck and two swings. This area is well suited to young children. 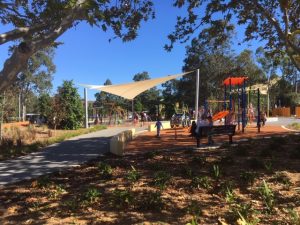 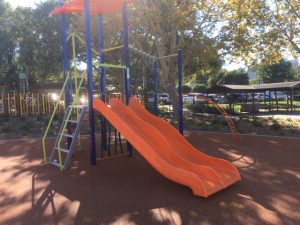 The surface throughout most of the playground is rubber softfall. There is some woodchip surrounding the plants and trees. There is also a large synthetic grass area, which is a great spot to put down a blanket and enjoy a snack or picnic. There are three sheltered picnic tables and some bench seating within the play space. 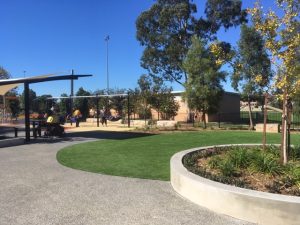 Immediately outside the fenced area are sheltered picnic facilities and barbecues as well as accessible toilets with changing facilities. On the day we visited three of the four restrooms had printed notices on the doors stating that they were closed for maintenance, so we were unable to check out the amenities for ourselves. There’s also a number of exercise stations and sporting fields.
There are several disability parking spaces immediately outside the playground entrance on Glebe Street. Two-hour parallel and 90-degree street parking is also available along Glebe Street, and we had no trouble finding a spot directly opposite the playground when we visited. The playground is about a 15 minute-walk from Parramatta Station or Bus Interchange. 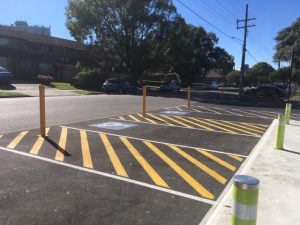 Overall it was a very successful visit, but we did find there were a couple of drawbacks to this playground. First, while the line of sight across the playground is good, visibility is obstructed by the large mound. My children spent much of their time going over and under the sides of the embankment, climbing, sliding and navigating the tunnels, and when one hurt herself at the other side – just a minor bump – I was not immediately aware.
The second issue is the lack of shade. On a warm mid-autumn day of approximately 28 degrees, it felt rather hot in the unshaded parts of the playground. The two shadecloths are not sufficient, particularly for the metal slides which become hot in full sun. We noted a sign warning the public about the slides and indicating that a shadecloth is scheduled to be installed in ‘late March 2019’. As of late April 2019, this had not yet been done. Over time, as the trees grow, we assume the playground will become more shaded too. For now, we recommend that you plan your visit for the earlier hours of the morning or afternoon and of course bring hats, sun protection and swimming gear to cool down at the water playground. 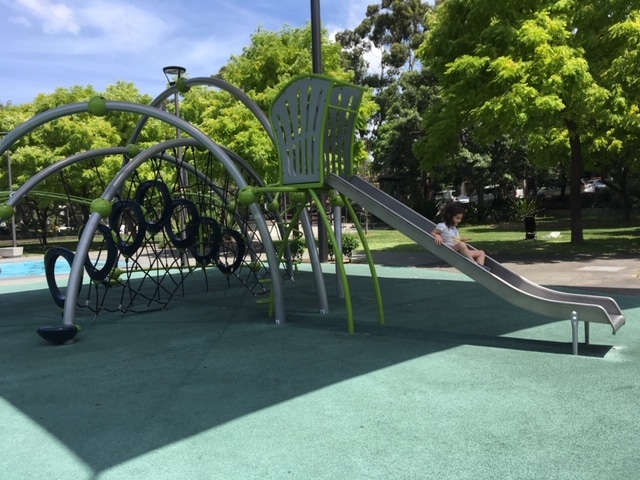 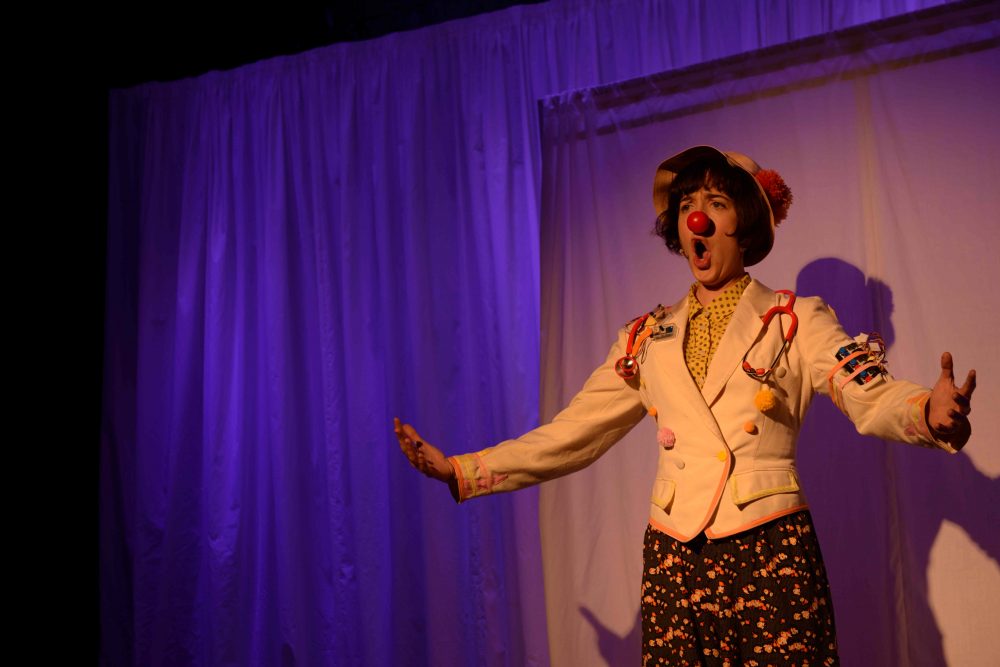 Back to the Future: Historic Parramatta River Swim Spot to Be Reopened After 52 Years
Previous Post
Next Post