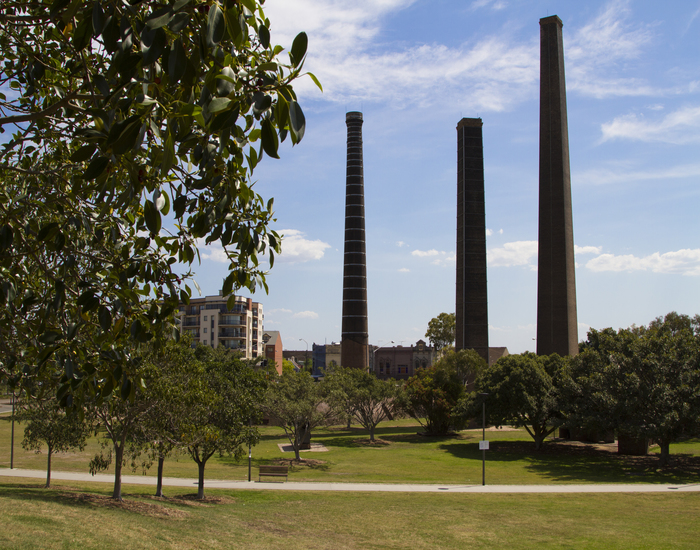 St Peters takes its name from its Anglican church was is the second oldest Anglican church in Sydney. In the 1800’s St Peters was described as one of the most fashionable places in Sydney. It gradually fell out of favour as a place to live as its dairy farming industry was slowly taken over by brick pits which were in operation until the 1970’s. When the last of the brick pits closed the land in which they operated was filled in to create what is now Sydney Park. Part of the Bedford Brick Works was preserved on the edge of the park and the tall chimneys, still visible from afar, were an attempt by the council at the time to reduce pollution from the dust created by the brick production.

Properties around St Peters today are a mix of housing, industrial and commercial. Housing is a mix of traditional terrace and workers cottages with new developments springing up beside them. St Peters is finding popularity again with young families and professionals due to its close proximity to the city and better affordability than some of the suburbs that neighbour it such as Newtown and Enmore.

The locals in St Peters certainly seem to enjoy their fitness as St Peters now has its own gym, an indoor climbing gym which caters to both adults and kids and is a fantastic place to burn off some energy on a rainy day. For the real thrill seekers you can check out the Sydney Trapeze School. Additionally for the runners there is Park Run which is a free, timed 5km run in Sydney Park each Saturday at 8am. A hub for artists, St Peters now has several artist run initiatives that are well worth checking out. And what inner west suburb would be complete without its artisan brewery? St Peters now boasts a locally run brewery with an environmental focus.

The locals in St Peters love living here as they can easily access all the culinary delights on Newtown and Enmore. It also has its own train station with making access to the city quick and easy and if you are travelling further then the airport is just a short drive away. Families in the area are fortunate to have access to 2 great public schools St Peters Public School and Tempe Public School.

And out of school hours many locals enjoy utilising Sydney Park which is a hot spot for young families with a large bike track complete with traffic lights and signage, while younger kids enjoy scooting around the large level village green. A lovely outdoor café complements the scenery alongside a fantastic children’s playground.

Hard working, enthusiastic and approachable, Louise is a respected local sales agent of the Inner West. Specialising in Tempe she brings a passion for the area and the lifestyle. Louise has built a strong reputation for achieving record sales by going above and beyond to exceed her clients’ expectations. Louise is well aware of the importance of building strong personal relationships on both sides of a business deal and ensures every contact with a new or existing client is an opportunity to raise the benchmark in quality of service, advice and results. As a successful real estate agent, Louise has a proven track record for high achievements. Her expertise extends to both low and high end property markets and she uses her exceptional negotiation and communication skills to attain the best possible results.